Since its inception in 2014, Star Individuality Foundation has funded 17 full art scholarships for emerging artists 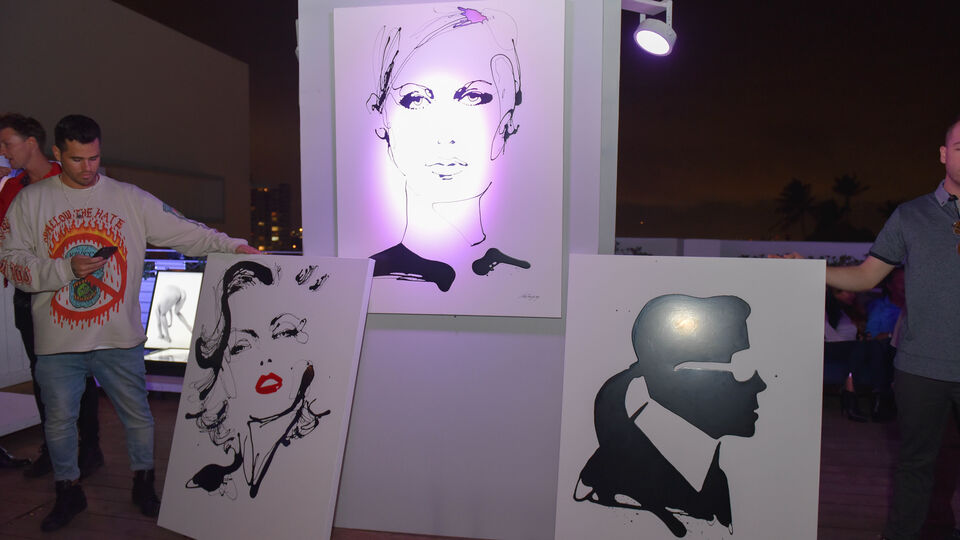 The evening, which took place at Soho Beach House’s swanky Ocho Rooftop terrace, brought together a host of emerging artists from around the world in a celebration of art and culture in the backdrop of Miami Art Week. As eminent guests mingled and perused the art on view during the exclusive event, a range of vibrant works on canvas went under the hammer. The event was staged by Star Individuality Foundation, which was founded in 2014 by former national-level champion fencer Austiage Medici de’ Valois Soleimani, alongside Harper’s Bazaar Art, and made possible thanks to the efforts of entrepreneur Jillian Jacobson and Caroline and Sophie Stanbury who devised the event’s exclusive guest list of art enthusiasts. Sponsors for the evening included Weekend LIVE Unlimited, Neiman Marcus Bal Harbour, which provided stunning showcases of top designer fashion, Dore Essentials and Volcan.

Among the highlights was the exclusive showing of Alex Richanbach’s Netflix feature film Ibiza, created with permission from Netflix as part of a five-part series montage exclusively for Star Individuality’s event. His videos could be seen not only from the rooftop, but from the entirety of Soho House as well as South Beach.

There was also Misha Japanwala’s series of three sculptures and jewelry developed to empower women in Pakistan. The artist’s desire was to inspire women to feel liberated in their bodies. “[My work was] inspired by honour killings and domestic violence amongst underprivileged women in Pakistan,” says the artist. “The narrative of my collection quickly transformed itself into what it means to be a Pakistani woman in general, and the struggles, judgement and opinions we have to face, no matter what our background. My journey made me question so much about what I thought I knew about my country, its people, and my relationship – as a woman and through my privilege – to the place where I am from. These are themes I hope to continue working on and representing in my art moving forward.”

Also on view were the stunning bronze sculptural works of Eleanor Cardozo. A former gymnast, for the last 20 years Cardozo’s work has been exhibited around the world at major events, including at the 2012 Olympics in high profile locations across London, including Heathrow T5, Westminster Abbey, and Kensington Palace Gardens.
Cardozo is Ambassador to Children and The Arts in London as well as Ambassador to Swiss Luxury Watch Brand Bedat & Co – bringing together the worlds of luxury, art and education.

There was then Tom Brown who created a digital visual art light sculpture which played off the wall of Soho House appearing as a complex light installation that moved across the wall. Titled Hope II, the work focuses on unifying people in a world that is forcing people further apart. Please see quote from him below. “In many ways today it can seem like we are becoming more and more isolated from each other, moving in different directions and gathering into fiercely guarded groups,” says the artist. “However, I believe we can still accomplish incredible achievements when we all pull together and focus on the shared experience of what unites rather than divides us.”